Back in March 2004, amendments to the Criminal Code of Canada were made to include Bill C-45. The inclusion of new duties for organizations to take reasonable steps to prevent harm to workers, contractors as well as the general public got the attention of supervisors and management personnel alike. They could now be charged and convicted under the Criminal Code of Canada for criminal negligence if they failed to meet this obligation.

Until recently, no convictions were made and the amendments may have become less of a concern for many supervisors and managers.

In December 2008, a corporation in Quebec was convicted of criminal negligence causing death. The corporation pleaded guilty to the charge after a twenty-three year old worker was fatally crushed after entering a moving part of a machine.

It was determined that the worker was not informed of the hazard of entering the area of free the jammed blocks. The investigated found a management representative was aware of the disabled light curtains and took no action to correct the situation.

Slide Locks in the USA

Safety blocking devices (ram blocks) are commonly installed below the ram of a punch press while performing maintenance work etc. Without any other energy sources, it is conceivable that a catastrophic failure of the press could occur and allow the ram to descend due to gravitational pull and injure or kill someone working under the ram.

Presses with a long stroke length and/or large capacity require larger and heavier safety blocking devices that smaller presses. Very often, personnel must struggle with the heavy blocks in very tight spaces. The weight of the blocks and/or the position of the person’s body can lead to a personal injury. Sometimes the person does not use the ram blocks and takes a serious risk when working under the ram.

During September 2007, the Occupational Safety and Health Administration (OSHA) issued an instruction for the enforcement policy, inspection procedures and performance guideline criteria regarding slide-locks – i.e., when they are used for hazardous energy control purposes. Previously, the Agency issued an interpretation letter prohibiting the use of slide-locks to replace safety blocks on mechanical power presses but due to improved technology and requests for further guidance on the subject, OSHA changed its position.

It is imperative that any user considering the use of slide locks in the USA, read and fully comply with the instruction.

Slide locks should prove beneficial in reducing injuries from the handling of heavy blocking devices as well as reducing the down time for lockout/tagout procedures. 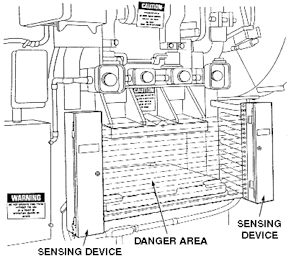 If someone gets trapped in your punch press, robotic cell or other piece of machinery, can you free the person quickly without causing further injury?

Members of your workforce likely know how to operate your equipment better that anyone else such as firefighters, police or anyone else called to assist in such a rescue.

When someone becomes trapped in machinery, incorrect action or failure to act may cause further injury or death to the victim. An emergency plan is paramount.

A good emergency plan consists of: